One of our greatest American photographic artists

Brett Weston seemed destined from birth to become one of the greatest American photographic artists. Born in Los Angeles in 1911, the second son of photographer Edward Weston, he had perhaps the closest artistic relationship with his famous father of all four of the Weston sons. In 1925, Edward removed Brett from school and took him to Mexico, where the thirteen year old became his father’s apprentice. Surrounded by revolutionary artists of the day, such as Tina Modotti, Frida Kahlo and Diego Rivera, and influenced as well by the striking contrast of life in Mexico, it was there that Brett first began making photographs with a small Graflex 3 1/4″ x 4 1/4″ camera. 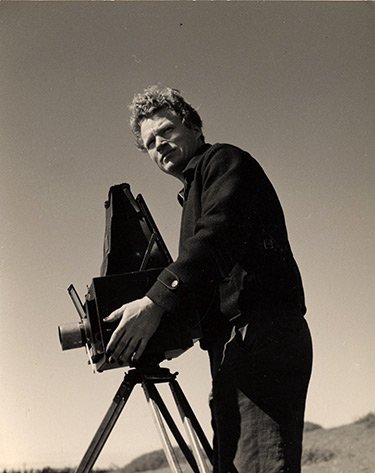 The introduction to modern art the younger Weston received, via the work of painters Rivera and Jose Clemente Orozco, unquestionably influenced his sense of form and composition. A quality of design was evident in Brett’s early images of the organic and man-made. He appreciated how the camera transformed subjects close up and how the contrast of black and white further altered the recognition of an object. It is therefore not difficult to understand his tendency to abstraction, a characteristic by which he would be identified throughout his almost seventy year career.

Returning to California in 1926, Brett continued to assist his father in his Glendale portrait studio while exhibiting and selling his own photographs. At the age of seventeen, a group of his images were included in the German exhibition “Film und Foto”, considered one of the most important avant-garde exhibitions held between the two World Wars. This recognition brought the younger Weston international attention and inclusion in numerous photographic exhibitions in the following years. Although his art will forever be associated with his father’s, it is unfair to continue to suggest that Brett’s style was overly imitative of Edward’s beyond these early years given what we have discovered in an enormous body of work produced over seven decades.

In 1929, Brett and his father moved to Carmel, California where the Weston family, including Brett’s three brothers, would maintain homes for the rest of their lives. At various times, Brett Weston also lived in Los Angeles where he had his own studio and portrait business, and in New York where he was stationed in the army. He later traveled extensively on personal photographic trips to South America, Europe, Japan, Alaska, and Hawaii. Following a 1947 Guggenheim Fellowship which he used to photograph along the East Coast, he moved to Carmel to assist his ailing father, and pursue his fine art work, including wood sculpture that was influenced by his own photographs.

Throughout the decades of the 1950s, 1960s, 1970s, and 1980s, Brett Weston’s style changed sharply and was characterized by high contrast, abstract imagery. The subjects he chose were, for the most part, not unlike what interested him early in his career: plant leaves, knotted roots, and tangled kelp. He concentrated mostly on close-ups and abstracted details, but his prints reflected a preference for high contrast that reduced his subjects to pure form. In the late 1970s and into the 1980s Weston spent much of his time in Hawaii where he owned two homes. He would travel back and forth between them, shooting along the way: “l have found in this environment, everything I could want to interpret about the world photographically.” Brett Weston died in Kona, Hawaii, January 22, 1993.

Subscribe to receive the latest news about the Brett Weston Archive

For all other information regarding the Brett Weston Archive please contact: